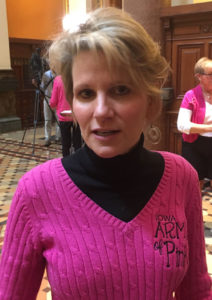 After five years of lobbying, the “Iowa Army of Pink” has won its battle at the statehouse.

“This is the day I’ve prayed about for so long and I can’t believe it’s finally happening,” Bridget Pargulski of Johnston said today.

She’s part of the group that’s been asking legislators to force health care providers to let a woman know if she has dense breast tissue, so she can get an ultrasound in addition to a mammogram. This year, the bill has easily passed the Senate and House and is headed to the governor. The legislation sets up new rules for health care providers, so women will be given information about breast density and the increased risks that may be associated with it.

Representative Brian Best of Carroll paid tribute to one of the bill’s long-time advocates.

“Today I want to call this bill ‘Patty’s Bill’ after Patty Bernard,” Best said. “She’s been at the capitol advocating for this bill year after year. She’s here again today. She has a nine-centimeter tumor missed on a mammogram and she now has stage four cancer. Patty, this bill is for you and for all of the Army of Pink.”

Bernard and other women dressed in pink who’ve lobbied for the bill for years were seated in the House balcony as the bill passed the House today. Bernard was surprised when Best mentioned her during House debate.

Bernard, who is from West Des Moines, has said during previous trips to the statehouse that she didn’t know mammograms sometimes do not show tumors if there’s dense tissue in the breast. Pargulski got involved in the lobbying effort because for four years in a row her cancer was missed in mammograms. She wore a pink sweater with “Army of Pink” lettering today.

“To get such a landslide vote was just amazing,” Pargulski said.

The bill passed the House on a 95-2 vote today. It unanimously cleared the Iowa Senate in mid-March and Governor Branstad is expected to sign it into law.