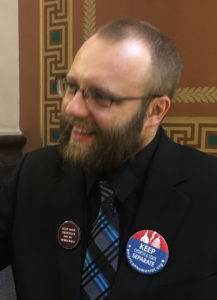 An atheist delivered an opening invocation today in the Iowa House.

“Instead of closing your eyes and bowing your heads today, please keep your heads up and your eyes open to be fully alert in this moment,” Justin Scott of Denver, Iowa, said.

He’s director of the Eastern Iowa Atheists. Scott asked legislators to use “the holy trinity of science” in their decision-making.

“Made up of reason, observation and experience, this trinity has allowed humanity to explore the deep reaches of space, develop life-saving medicines and vastly improve the human experience,” Scott told legislators.

Scott said the “trinity” of reason, observation and experience can help legislators “do the most good for the most Iowans.”

“The trinity I invoke today isn’t rooted in any kind of doctrine or dogma. In its pursuit of truth, it doesn’t care what our feelings are or what our deeply-held beliefs are on a particular issue,” Scott said. “Truth can sometimes be uncomfortable, but it plays a large part in the evolution of our species.”

Afterwards, Scott told reporters he had no reservations about delivering what’s called “the opening prayer” because the U.S. Supreme Court has ruled it’s legal for prayers to be said at the opening of government meetings.

“And so rather than picking a fight and saying: ‘Let’s get rid of prayer before statehouse meetings,’ we kind of just said: ‘The groundwork’s been laid. We need to play on that field,'” Scott said.

Scott, who is 33 years old, was baptized in the Lutheran Church. He works as a freelance photographer and social media consultant. Scott said he took great care in writing the invocation and “being professional” as he delivered the message.

“There’s already a negative connotation about the word atheist that we have to fight uphill against,” Scott told reporters, “but there’s another image of us being the angry atheist, the pissed off atheist and by coming in here and just being really calm, really happy, cheerful, smiling as we walk around, shaking hands, there wasn’t any pushback.”

It appeared as though about half as many people were present in the House for the opening prayer as normal, but that could be less about any boycott of Scott and more about getting to work late since last night’s debate lasted past 10:30 p.m.

The House begins each day with a prayer. Most are delivered by guests invited in by legislators. Scott was invited by Democratic Representative Timi Brown-Powers of Waterloo. Nearly two years ago, a Wiccan priestess who was a cabot witch was invited to deliver the opening prayer, but lawmakers believe Scott is the first atheist to kick off daily proceedings in the House with an invocation.

Scott also chose not to join in reciting the Pledge of Allegiance with legislators, as a show of support for humanists who do not participate in saying the pledge.