You are here: Home / Agriculture / State could see a record number of new EAB infected counties 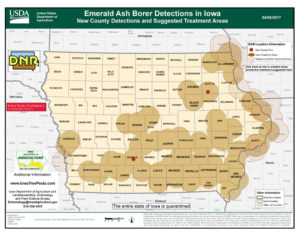 Fayette and Madison counties are the latest to be confirmed for and emerald ash borer infestation — making a total of 45 of the 99 counties now hit.

Iowa Department of Agriculture EAB coordinator Mike Kintner says we could see more counties confirmed this year then we’ve ever seen before. “We’re already off to six counties in 2017, based on that I would maybe guess that this could possibly be a record year for new county finds in Iowa,” Kintner says.

There were 10 confirmed EAB counties in all of 2016. The Fayette County was in a city-owned ash tree in Oelwein, while the Madison County, find was in a rural area south of Winterset.

“These two recent discoveries are pretty usual of what we’ve been finding,” Kintner says. “People have been out and about and noticing the woodpecker activity, and that’s kind of what drew our attention to these trees.” The woodpeckers are looking for the bugs which can destroy ash trees. Kintner says some of the increase in more confirmed county EAB infestations could be due to better recognition by people from all the publicity given the pest.

“There’s a lot of outreach being done, so when people notice these signs and symptoms with these trees, I think we are getting these calls earlier than we did with the initial symptoms when it first hit Iowa,” Kintner says. This green beetle was first discovered in Iowa in 2010. He says this is the time of year when they will get more active.

Kintner says the emerald ash borer larva has been in a resting stage underneath the bark this winter and around June the adults will emerge from underneath the bark and start to fly and lay their eggs on things such as firewood and nearby ash trees. Kintner says its important for people to be aware and not help transport the pests across the state.

“I would just encourage people to keep their firewood local and not move it around. Unfortunately, that’s how a lot of these new EAB infestations are started,”Kintner says. Additional information on the ash borer is available at: www.IowaTreePests.com