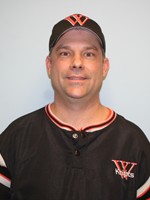 The top two teams in the Iowa Conference pre-season baseball poll collide beginning Friday when Wartburg visits Luther to open a three game series. Wartburg is 5-0 in the league race after taking two wins from Simpson this week.

The Knight’s offense is led by Blake Mahoney and Eric Willis. Mahoney is hitting .407 while Willis is setting the table as the lead-off hitter with a .402 average.

“Eric has shown that consistently through the season,” said Wartburg coach Joel Holst. “Him and Mahoney have been the guys that have led us and been consistent. Eric is so athletic that when he does get on base he can make things happen.”

Luther is 3-5 in conference play after dropping both ends of a twin bill to Central.

“I would think that just means we are going up into a hornets nest,” Holst said.

Elwin Huffman contributed to this story