You are here: Home / Sports / Johnson beats the heat and field at Texas 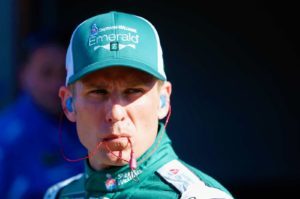 (NASCAR)—Jimmie Johnson has taken an important first step toward an unprecedented eighth NASCAR championship by fighting off late-race cramps and winning the 500-mile race on the newly-paved Texas Speedway.

Johnson’s in-car cooling system did not work, leaving him without hydration during the three hour, twenty-four minute race on a hot day. As he was running down then-leader Joey Logano, he said, he “started cramping pretty good on my left side, my chest and my biceps, my forearm, and I knew I was real low on fluids.” He cut the festivities short in victory lane when his cramping became worse and spent an hour at the infield care center where he receive three bags of fluid intravenously.

The victory is likely to qualify Johnson for the first round of the championship chase later this year. He’s tied with Dale Earnhardt, Sr., and Richard Petty with seven championships in NASCAR’s top series.

Jamie McMurray bounced back from his last-place finish at Martinsville last weekend to come home seventh after running in the top five for much of the race, his fourth top ten finish in the seven races this year.

The engines will be silent next weekend because of Easter. The series goes back to a short track on April 23—at Bristol.