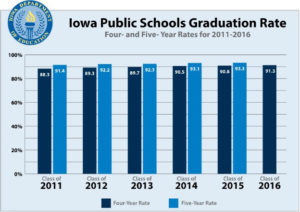 The number of Iowa students who are graduating high school in four years continues to increase.

“The four-year high school graduation rate is up about three-tenths of a percentage point  — from 90.8 percent to 91.3 percent —  and we consider that statistically significant,” according to Iowa Department of Education spokesperson, Staci Hupp.  It’s the fifth straight year the graduation rate has gone up.

The state also saw a slight increase in the dropout rate for the last year. Hupp there can be an increase in both areas in the same years as the graduation rate tracks a single class from their freshman through their senior year, while the dropout rate includes students in all four classes who drop out in a single year.

“That’s something that we are keeping an eye on,” Hupp says. “We also know that over time, Iowa’s dropout rate has declined.” The dropout went from 2.5 percent up to 2.8 percent in the last school year. That rate had been falling since the 2010-2011 school year when it was 3.4 percent.

The increase in the graduation rate likely keeps Iowa on top of the country. “Iowa’s had the highest graduation rate in the country the last few years, and in fact in 2015 Iowa became the first state with a high school graduation rate above 90 percent,” Hupp says. “We have not seen U.S. Data for the class of 2016 yet — but we’re really proud to be a leader in graduation rates.”

Hupp says the system they now have that tracks students once they begin their freshman year has helped keep kids on the graduation track and in school. “School districts can really hone in and account for all students as they move through high school. And so they are really looking and digging into the data, trying to identify where students have fallen behind, where they can offer support. And they are also working hard to engage students who are no longer coming to school,” Hupp explains.

Hupp says keeping kids in school and getting them to graduate is just one part of the education process. The other is to ensure they are learning what they need to learn to prosper beyond high school.

“It’s so important not only that Iowa students graduate from high school — but that they also graduate with the skills that they will need to succeed after high school and postsecondary education and training,” Hupp says. “This is especially important in light of the fact that Iowa has a goal of 70 percent of Iowans in the workforce having education or training beyond high school by 2025.”

For more detailed information on the graduation and dropout rates, go the Iowa Department of Education’s website at: www.educateiowa.gov.