You are here: Home / Crime / Courts / Police officers team up with Hawkeye wrestlers for training 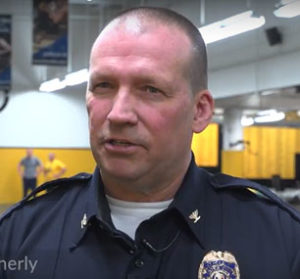 Officers with the Iowa City and Oelwein police departments and the University of Iowa Department of Public Safety recently got some All-American training in how to handle someone who doesn’t want to cooperate.

Iowa City Police Chief Jody Matherly was looking for a better way to train officers and after talking with U-I Public Safety director Scott Beckner, they decided to ask for help from the University of Iowa wrestling team. Matherly had a couple of goals in mind.

“To be a little better at our defensive tactics and our ability to control people with decreasing the likelihood that officers would be injured or the suspect,” Matherly says. Matherly had previously been a certified high school wrestling coach, and he thought partnering with the Hawkeyes would be a good idea. Iowa assistant wrestling coach, Ryan Morningstar, says they appreciated the opportunity to help out. 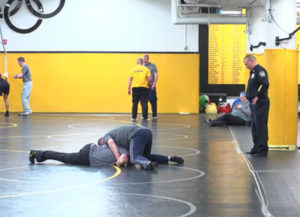 “It’s a pretty cool partnership and we’re glad to help in any way that we can, and hopefully some of our techniques can transition over to the field,” Morningstar says. Iowa All-American wrestlers Matt McDonough, Mike Evans and Thomas Gilman helped instruct officers. Morningstar says the officers learned some key moves to protect themselves.

“They’re being taught basically how to sprawl, defend yourself off of leg attacks. Being able to put a guy down and defend yourself,” Morningstar explains.

Sergeant Doug Hart is the training coordinator for the Iowa City department and for him the wrestling training was a breathe of fresh air.

He says training can get monotonous, especially for older officers like himself who don’t look forward to the defensive tactics training. “What a great idea to freshen this up and I think it brought a lot of synergy to the training and to our department.”

Chief Matherly is pleased with the way the training turned out. “It’s a win- win for us — and it’s a win-win for the defendant, the suspect — we don’t want them hurt,” Matherly says. He says officers will try to get someone to comply by talking to them, but sometimes that doesn’t work and they have to be prepared to go hands-on to take a person into custody.