You are here: Home / Crime / Courts / DMACC to expand TSA training to officers in other states 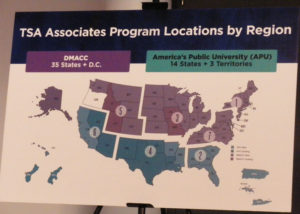 Des Moines Area Community College  is taking on a larger role in the advanced training program offered to the officers who provide security at the nation’s airports.

The Acting Deputy Administrator of the TSA, Fred Stein, announced today at the Des Moines airport that D-MACC will now provide the training for officers in 35 states covering 285 airports.

“Technical training teaches employees what to do. The associates program educates employees so that they think about how their activities support and are part of the larger Homeland Security enterprise,” Stein says.

The program started in 2010 and had been provided by several different schools, but now D-MACC and American Public University in West Virginia will the only two schools providing the training.

D-MACC president Rob Denson says the change will more than double their Criminal Justice program. “We are now in the process of hiring four new fulltime criminal justice faculty members to help us further develop this program and be prepared when our big launch happens in the fall and all of these states begin to register students,” Denson says.

“We utilize a variety of assignments, most of them are going to be things like kind of a ‘what would you do?’ Here’s a scenario and what would you do? And that’s where it’s really enjoyable to see them try to think through it,'” Cole explains. 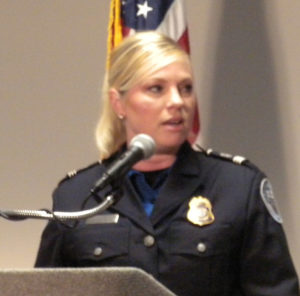 Des Moines TSA officer Dawn Smith is taking the courses. “It’s really made me a more effective officer in my position. As opposed to just seeing what I am told when I am trained, I am learning more than what I was initially given in the beginning,” Smith says. Smith says they get an overall view of the Homeland Security Department and how each individual piece impacts the others. And she says the scenarios used in the training really help them develop their skills.

“Now my brain is really thinking — it could be anybody — it doesn’t have to be some stereotype. It could be anybody who is angry with the way things are,” according to Smith. Smith is married with a family and says the online option was key to allowing her to take the courses. She expects officers in other states to find the online courses work well for them.

TSA officers who complete the work for the certificate can then move on to gain a criminal justice degree.