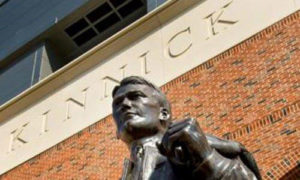 Statue of Nile Kinnick outside Kinnick Stadium in Iowa City.

Republicans in the legislature are getting rid of a requirement that art be installed in new state buildings. Senator Charles Schneider of West Des Moines said it’s not because he and other Republicans are against art.

“When I talk to taxpayers and they know what tough times we’re going through, I hear complaints about things like public art at rest areas…about public art at a hog farm,” Schneider said. “Taxpayers expect us to use their dollars better.”

Republican Governor Robert Ray approved creation of the Art in State Buildings program back in 1979. It means that ever since, one-half of one percent of the cost of any new state building has been spent on paintings, sculptures or other works of art. Republican Senator Dan Zumbach of Ryan said he has no problem with art “in its proper place,” but he suggested the law has led to ridiculous situations.

“I don’t know if any of you have visited the dairy barn at Iowa State University, built it a few years ago, really nice place,” Zumbach said. “…They’re required to put art in that barn. Put some beautiful stuff in there. Looked really nice the first year, but now it’s covered with fly poop.”

Democrats lamented the program’s demise. Senator Bill Dotzler, a Democrat from Waterloo, said it’s too easy to dismiss the importance of public art.

“This is more than just something that people look at and go, like, ‘Ooo,'” Dotzler said. “…The truth of the matter is it’s important to who we are and the young millenial generation. It’s one of the things that they look towards, communities that have art and culture and music.”

Senator Herman Quirmbach, a Democrat from Ames, said the move’s curious since legislators do their work in an historic state capitol building that is “adorned” with art.

“Let’s not abandon the commitment that our forefathers and foremothers made to public art,” Quirmbach said. “It’s an investment that pays dividends through the generations.”

Iowa was among the first states in the country to pass a law requiring art in publicly-funded buildings. A statue of Hawkeye football icon Nile Kinnick was commissioned through the Art in State Buildings program. It stands at the entrance to Kinnick Stadium.

According to the Iowa Department of Cultural Affairs, Iowa State University’s Art on Campus collection in Ames is the largest program of its kind. It includes a mural by famed artist Grant Wood in the ISU Library. ISU also had the first sculpture-in-residence at any U.S. university. Christian Petersen was a sculptor and professor at Iowa State for nearly two decades.