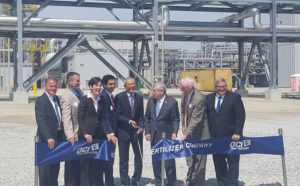 Governor Branstad and others cut the ribbon for the new plant.

It took four years, 3,500 construction workers, and $3 billion, but the Iowa Fertilizer Plant in Wever is finally up and running.

Governor Terry Branstad and Lieutenant Governor Kim Reynolds were on hand Wednesday to help officials from OCI Iowa Fertilizer, the company that runs the project, cut the ribbon signifying the official start of production. “This was not an easy project,” said Branstad. “It was a big challenge. The company partnered with countless businesses and suppliers to drive real economic growth…that benefited communities in this entire region of the state.”

The plant is now expected to support around 200 full-time jobs with a payroll of $25 million annually. It’s the first large-scale nitrogen fertilizer facility built in the United States in more than 25 years. In addition to producing nitrogen fertilizer, the plant will also produce Diesel Exhaust Fluid, which is an additive to diesel engine designed to reduce emissions. 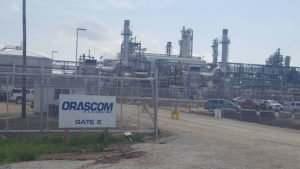 Iowa Fertilizer Company President Larry Holley says local contractors and partnerships with organized labor groups and state and local politicians were instrumental in the completion of the project.

“This has been a true collaboration that has helped spur meaningful growth and economic development throughout our southeast Iowa community,” Holley said. The company says that plant will produce up to two million metric tons of nitrogen fertilizer every year. The ribbon cutting comes after one full year of delays in construction on the plant.

Site Operations Director Darrell Allman says that there are still some quality tests to be run on the finished product before it makes it to market but that the “real end is almost in sight” for the construction phase of the project.