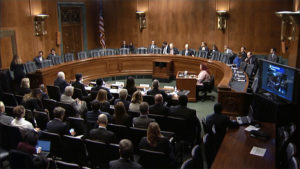 A central Iowa man will be testifying this morning before the U.S. Senate panel chaired by Iowa Senator Chuck Grassley about the importance of protecting intellectual property.

The Senate Judiciary Committee will hear from Neal Gutterson, the vice president of research and development at DuPont Pioneer Hi-Bred International, based in Johnston.

Grassley says, “He will testify about how DuPont Pioneer’s data programs, which have boosted crop yields and reduced reliance on chemical pesticides and fertilizers, have relied on the constitutional intellectual property protections that we have in this country.”

Back in 2013, a group of seven Chinese nationals were arrested by federal authorities in Iowa. They were accused of going into several Iowa corn crops and stealing seeds to send back to China. Grassley isn’t sure whether Gutterson will be addressing that incident.

The Iowa Republican is introducing a bill today, along with Senator Patrick Leahy, a Democrat from Vermont. Grassley says, “This bipartisan bill will build on existing award programs at the U.S. Patent and Trademark Office which improves incentives for patent holders who use their technology to improve the health and quality of life in impoverished nations.” Grassley says intellectual property protections are vital to innovation, safety and to the American economy.