You are here: Home / News / The Upper Cedar River to get a cleaning this summer for Project AWARE 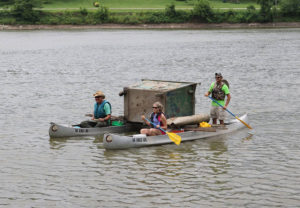 A dumpster pulled out of the water during the 2016 Project Aware.

An annual volunteer river cleanup event will focus on a waterway in northern Iowa this summer.

Lynette Seigley, coordinator of Project AWARE, says the expedition is scheduled for July 10th through 14th on the upper Cedar River.

“We’ll be starting at the Iowa-Minnesota border and covering about 60 miles down to the town of Nashua. So, we’ll be passing through Mitchell and Floyd counties,” Seigley said. Project AWARE, which stands for “A Watershed Awareness River Expedition,” is supported by the Iowa Department of Natural Resources.

In 2016, around 330 volunteers spent five days on the lower Des Moines River and removed 40 tons of trash. Most of it was recycled. “Last year, there was a fiberglass boat that came off the river, several bathtubs, a lot of scrap metal, and there was a dumpster that was removed from the river,” Seigley said.

Many volunteers camp out and spend all five days on the expedition, but Seigley says people can stay and help for as little or as long they like. In addition to the river cleanup, there are educational programs in the evening that highlight the geography and history of the particular area where the volunteers are working.