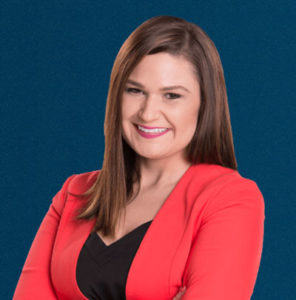 A state legislator from Dubuque announced today that she will run for the U.S. House in 2018, hoping to challenging Republican Congressman Rod Blum, who’s also from Dubuque.

Democrat Abby Finkenauer is 28 years old and has been elected to two terms in the Iowa House. Finkenauer is emphasizing her “working class roots” as the daughter of a union pipe fitter and a public school employee.

“I think people want to see somebody running for office who looks like them, talks like them and understands what their life is like,” Finkenauer said during a recent appearance on Iowa Public Television’s Iowa Press program.

According to Finkenauer, economic issues should be paramount for her party.

“What we need to be focused on as Democrats is: How do we make it better?” Finkenauer said on IPTV. “How do we move forward?”

Finkenauer released a written statement today, saying “Iowans need a fighter who…isn’t afraid to take on out-of-state corporate interests drowning out the voices of the rest of us.” At least one other Democrat who indicated an interest in running for congress in the first district, so Finkenauer may face a primary in June of 2018.

Congressman Blum won his second term in the U.S. House in 2016 and he’s expected to seek reelection next year. Blum today announced the details for a series of town hall-style meetings he’ll host in the first district next week, starting with an event in his hometown of Dubuque on Monday night.

Photo courtesy of the Finkenauer campaign.