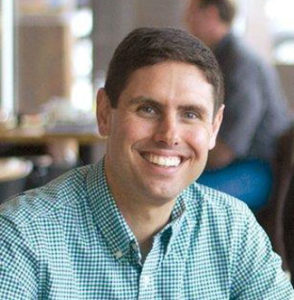 A first-term state senator who became a leading voice against GOP initiatives in the 2017 legislature is running for governor.

Thirty-six-year-old Nate Boulton is an attorney in Des Moines, but he’s officially launching his campaign this morning with a web video and an event in his hometown of Columbus Junction. Last week, during an appearance on Iowa Public Television, Boulton said Democrats win by offering voters a “positive, uplifting” message.

“What can Iowa look like if we actually do fully fund education, if we actually do offer the most educated, skilled, productive workforce for the next generation of our economy?” Boulton asked. “And that’s, I think, exactly what we want to do.”

The lessons of the 2016 campaign are fairly clear for Democrats according to Boulton.

“People want to be excited about a message and it was very unclear for a lot of Democrats, if I knock on my neighbor’s door, what is the message this year for electing a Democrat,” Boulton said on the “Iowa Press” program. “…This legislative session handed it to us. It’s about an economic vision for our state that is long term and improves the quality of life in Iowa.”

Boulton, who was sworn in as a new state senator in January, was thrust into the spotlight in February as Republicans in the legislature introduced a bill that scaled back Iowa’s collective bargaining law. Boulton was among a handful of Democrats who debated the bill through the night. In March, Boulton led the Democrats’ charge against another GOP inititive that changed the rules for compensating injured workers. Boulton is an attorney who has represented injured workers.

“We may have had some losses this last election cycle, but Democrats are still here. We are still fighting and I think we saw great reaction to that,” Boulton said. “We saw thousands of people coming to the capitol. We saw hundreds showing up at forums, getting reengaged and we showed that we have a strong message, too.”

Boulton will face a primary in June of 2018, as other Democrats have announced they’re running for governor. State Representative Todd Prichard, a lawyer from Charles City, former Iowa Democratic Party chairwoman Andy McGuire and Rich Leopold, a conservationist, have all launched campaigns.

Republican Kim Reynolds will likely become governor later this month when Terry Branstad resigns to become Ambassador to China. She has already raised a million dollars for her 2018 campaign for governor.