You are here: Home / Crime / Courts / Cherokee woman sentenced to a decade in prison for 2015 crash 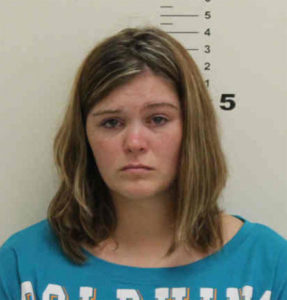 A northwest Iowa woman, blamed for a 2015 traffic crash that injured two others, was sentenced Monday to 10 years in prison.

Thirty-year-old Melissa Ebert of Cherokee pleaded guilty in April to felony charges of reckless driving. As part of a plea deal, attempted murder and second-offense OWI charges were dropped.

Police said Ebert was slightly over the legal limit of .08. Ebert was allowed to give her account of the events that led up to the crash. She said her boyfriend, Damian Johnson, was drunk when she picked him up in Sioux City. He insisted on meeting a friend at a bar.

“They continued to drink, they tried to get me to drink and I said ‘no’ because I was driving,” Ebert said. “Then, we went to his friend’s house and he kept yelling at me and calling me all sorts of names.” According to Ebert, Johnson continued to push her to drink.

“So, I’d take a little sip to try and make him happy. He’d grab the end of the glass and push it up, so it was either going to go on me or in my mouth,” Ebert said. Eventually, the friend told Ebert and Johnson to leave. Ebert said she repeatedly tried to convince Johnson that they should catch a ride with a sober driver.

“And he said, ‘no, you’re going to get in the car or I’m going to hurt you. I’m going to kill you.’ So, he pretty much put me in the car,” Ebert said. Ebert was behind the wheel when her car slammed into another vehicle southeast of Le Mars. Ebert and Johnson were injured, as was the driver of the other car, Dustin Boll of Le Mars. At her sentencing hearing, Ebert apologized to Bull’s family. Ebert has a daughter with Damian Johnson.

“I just want to be back with my daughter as soon as I can,” Ebert said. “I love her to death, she’s everything to me.” District Judge Duane Hoffmeyer sentenced Ebert to 10 years in prison.