You are here: Home / Education / Leath wraps up time at ISU with discussion of tuition 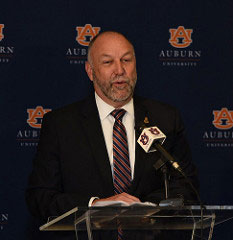 Steven Leath completed his last day as the president of Iowa State University by participating in a Board of Regents meeting Monday where a proposed tuition increase was discussed.

Leath is leaving Ames to become the president of Auburn University. The tuition discussion touched on student debt, and Leath says progress has been made in reducing the debt students face when they graduate.

“In the ideal world it’s nice if you graduate with no debt — but I am not sure that is necessary. I am not even sure that is ideal — because students perform better when they have skin in the game,” Leath says. Leath points out that the two most popular majors at I-S-U, engineering and ag, have a 98 percent placement rate for students. And he says they are getting high-paying jobs.

“I don’t know that it is such a bad thing, even though we don’t like to talk about it, but if a kid gets a high-paying job as soon as they graduate, that they have some responsibility to pay for part of their education,” Leath says. He says the placement rate is also high for several other majors and that should be considered in the talk about the cost of education.

“And I think placement rate and overall success of the graduate when they get out probably should be talked about more often,” Leath says. Leath joined the meeting Monday by telephone and said he was finishing up some final paperwork on his last day. Former UNI president Ben Allen takes over as the interim president at the Ames school. The search is underway for Leath’s replacement.