You are here: Home / News / ‘I’ve done what I believe is right,’ Attorney General Miller says 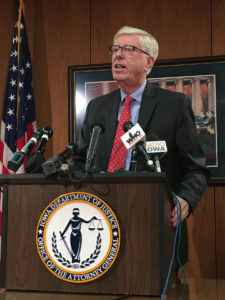 “On this issue, I’ve done what I believe is right and that’s always, in the end, served my interests with the electorate,” Miller told Radio Iowa this afternoon. “The electorate, I think, has taken their measure of me and they know that when I do something to interpret the law, I do the best I can based on the law, not on politics or any other considerations.”

Miller issued his legal opinion on May 1, reversing a statement released in December that indicated Miller believed Reynolds would have the power to name a new lieutenant governor once she becomes governor. Branstad said Miller “allowed politics to cloud his judgment” and a chorus of Republicans have accused Miller of trying to “delegitimize” Iowa’s first female governor.

“Despite the heated rhetoric, I made my decision based on the law, not on politics,” Miller told Radio Iowa, “as I have done on every attorney general’s opinion I have issued while I’ve been attorney general.”

Miller acknowledged his working relationship with the governor’s office is on a “bumpy road” right now because he changed his new legal advice on the Branstad-to-Reynolds transition, but Miller said to “change his mind once or twice in a few decades is not extraordinary.”

Miller was first elected Iowa’s attorney general in 1978 and he told Radio Iowa he intends to seek reelection in 2018.