You are here: Home / News / Pence to headline Ernst’s 2017 ‘Roast and Ride’ fundraiser 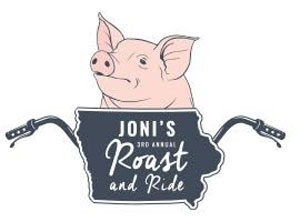 Vice President Mike Pence is the keynoter at the annual “Roast and Ride” fundraiser Senator Joni Ernst will host June 3 in Boone. Ernst made the announcement in a video released by email early this  morning.

“Many of you know, the Roast and Ride has become a great family-friendly tradition that includes a motorcycle ride honoring our veterans,” Ernst said, “followed by a barbecue where we hear from some of the top leaders from around the country.”

Donald Trump was the main draw at the second annual “Roast and Ride” last year, after he secured the GOP presidential nomination. Ernst has traditionally given the state’s top Republicans speaking time on stage as well and this year’s event is no different.

“This year I’m excited to share with you that we will be joined by Congressmen David Young and Steve King, Senator Chuck Grassley, our soon-to-be first female governor of Iowa, Kim Reynolds,” Ernst said in this morning’s video.

Another U.S. Senator will have a turn on stage, too. South Carolina Senator Tim Scott will be making his second, high-profile speaking appearance in Iowa, stoking speculation he has White House ambitions.

The first edition of the Ernst “Roast and Ride” in 2015 was a showcase for a string of Republican presidential candidates. Wisconsin Governor Scott Walker rode a rented Harley alongside Ernst on the route to that 2015 event. Shortly after Ernst was elected in 2014, she decided to host an annual fundraiser — similar to the “steak fry” Democratic Senator Tom Harkin held every fall — as a proving ground for presidential candidates of the present and future.