You are here: Home / News / Monster mushrooms signal start of the end of morel season 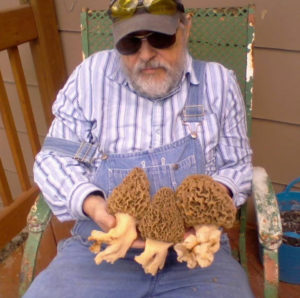 Michaela Welch took this picture of her grandfather, Everett Garr, and the bigfoot morels he found.

Bigfoot’s been spotted in southern Iowa — the mushroom variety — not the big hairy ape-like creature.

The Iowa DNR is showing a picture of large morel mushrooms on its Facebook page that was sent in by the daughter of the man who found them in southern Iowa. The DNR’s Alan Foster says the large yellow-colored morels are different from their smaller yellow counterparts.

“It’s technically a separate species — at least from the training that I’ve received. It’s a morchella crassipes, more well known as bigfoot,” Foster says. And it’s one that pretty much signals the end of the season in that particular area.” The bigfoots are the last in the line of the morels that pop out in spring.

“With the progression of morel growth, we start with the greys, and then we get the yellows that are typically four to five inches tall. And then we get the bigfoots. Like their name implies, they can be a foot tall and as wide as a pop can,” Foster says. The recent discovery of the monster mushrooms fits in with the way the entire season has gone.

“I mean, it’s been a solid season, but I wouldn’t say it has been gangbusters,” he says. The area of the state where you hunt mushrooms could dictate how well you did in finding them.

“I think with the fluctuation of weather patterns and stuff, certain areas didn’t get what they needed, and certain areas did,” Foster says. If you haven’t been out hunting morels yet this season, time maybe running out.

Foster says this weekend may be about the end unless you can find some in the northern part of the state. He says some of his friends are heading to northeast Iowa this weekend and if they don’t find any mushrooms, they will be done for the season. The photo that’s getting all the attention was sent into the DNR from Michaela Welch, and shows her grandfather, Everett Garr, and the bigfoot morels he found in southern Iowa two weeks ago.