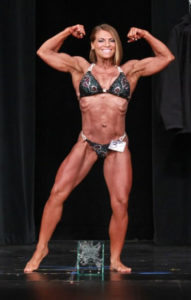 Bodybuilders from across the region are in central Iowa this weekend for the 23rd annual contest known as the Natural Iowa Bodybuilding, Physique, Bikini and Figure Championships.

Organizer Ryan Irwin says about 150 fitness fanatics from Iowa and several surrounding states will be in Des Moines to show off their washboard abs, powerful quads and beautiful backs.

“It’s a drug-tested event for our competitors in physique sports, as I like to call it,” Irwin says. “These are male, female, teenagers up to competitors over 50 years old competing on stage. All of them have a similarity in that they’re in the best shape of their life.” There are various classes of competition, ranging from the heavily-muscled bodybuilders to the bikini division for the women.

“The judges are comparing each of the competitors from a symmetry standpoint making sure that top to bottom, left to right, back to front, that they have good balance,” Irwin says, “making sure they’ve got good definition, low body fat.” The first word in the name of the contest is “natural” and Irwin stresses, none of the athletes are chemically-enhanced. Every competitor will undergo a polygraph exam and be subject to urinalysis, he says, and the seven-year drug-free eligibility requirement is strictly enforced.

“Our youngest competitor is 16-years-old and we’ve got a competitor that’s in his mid-50s,” Irwin says. “Tell you what, most 20-year-olds would love to have a physique like him.” The event is being held starting at 8:30 AM today at Hoyt Sherman Place in Des Moines.