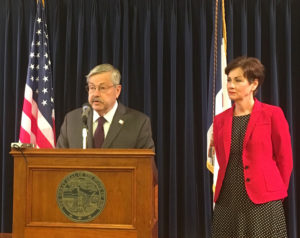 The embargo was imposed in 2003 after a Mad Cow case. China actually agreed to lift the ban last September, but it wasn’t until last week that the reopening was finalized. Branstad expects U.S. beef imports to hit China in mid-July.

“So I intend to bring Iowa premium beef to China and I intend to serve it in the ambassador’s residence and in the embassy,” Branstad said during his weekly news conference, slapping his hand his lectern in celebration. “This is a big deal. This is a really big deal.”

Sometime this week, Branstad is likely to be confirmed by the U.S. Senate to serve as U.S. ambassador to China. In the past four years, Chinese per capita consumption of beef has grown 33 percent.