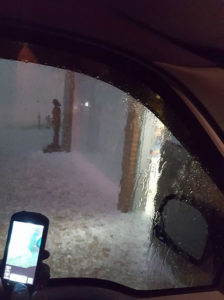 Hail at the Fort Atkinson Fire Department shown on their Facebook page.

The southern part of Winneshiek county suffered heavy storm damage after a round of severe weather went through the area Monday night.

Winneshiek county emergency management coordinator Sean Snyder says the most localized damage came in the southwestern portion of the county. Large hail did a lot of damage.

“In Fort Atkinson the homes on the west side of people’s properties are completely shredded. Kind of looks like Swiss cheese in a way — it’s heavily damaged,” Snyder says. Wind and hail damage was reported in Calmar and Ossian as well. 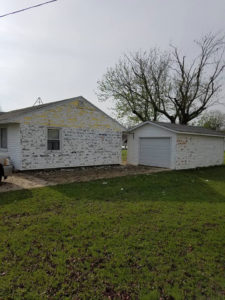 Snyder says officials from the National Weather service office in La Crosse, Wisconsin will be on the scene today.

He says they’ll do an assessment and match the damage with the models they produced to confirm how accurate their models were and can maybe explain the type of storm that hit.

The National Weather Service had issues a tornado warning for the area around 7 p.m. Photos from the area show the ground white with hailstones.