You are here: Home / Human Interest / Replica of Vietnam Veterans Memorial on display in northeast Iowa 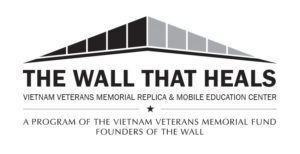 A traveling 250-foot replica of the Vietnam Veterans Memorial in Washington D.C. is in northeast Iowa this week.

“The Wall That Heals” will be outside the AMVETS Post 49 building in Cedar Falls from Wednesday night through Sunday afternoon.

Tim Tetz oversees the wall program for the Vietnam Veterans Memorial Fund. He says the mobile exhibit travels to communities across the country, allowing those who can’t make it to the nation’s capital to see the real thing.

“It is exactly half as tall and half as long as the memorial in Washington D.C. and it lists the 58,315 casualties of the Vietnam War,” he says. An opening ceremony for The Wall That Heals is scheduled for 7 P.M. Wednesday. Afterward, the portable monument will be open free of charge, around-the-clock through the closing ceremony at 3:30 P.M. Sunday. Tetz says other events are also planned.

“There’s a welcome home ceremony on Friday at 7 P.M. where they recognize the Vietnam veterans who served and who came home,” Tetz says. “There will be a Quilt of Valor event on Thursday. Throughout the week, there are a number of opportunities for people to get more than just a simple visit out of it.” The portable monument includes a mobile education center which Tetz says tells the story of the controversial military conflict.

“The mobile education center is the 53-foot trailer that the wall is carried in,” Tetz says. “When we open up the sides of that, we’re able to have a traveling exhibit of a museum that we’ll eventually build here in Washington D.C. It really expands the visitor’s understanding and perspective of the memorial and the war.” Tetz says there are three display panels inside the trailer that feature various items left by family members or friends to honor soldiers who gave the ultimate sacrifice.

“Today, the National Park Service has a collection of some 400,000 items that have been left behind at the wall and we’re bringing some of those items with us,” Tetz says. “We’re able to show things like a riding helmet, someone’s boots, plenty of POW-MIA bracelets and letters that are just going to tear at your heart.” Tetz says three six-foot television monitors recently installed inside the education center shows digital images of individual soldiers who are memorialized.

Officials with the Vietnam Veterans Memorial Fund hope to someday have a photograph of all 58,315 soldiers whose names are engraved on the wall. Since its dedication in 1996, The Wall That Heals has visited more than 400 cities across the county. Cedar Falls is the only Iowa stop on the exhibit’s 41-city tour this year.