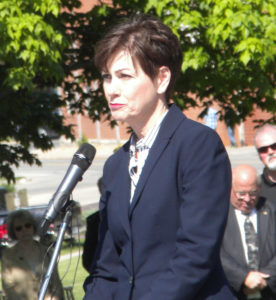 Lieutenant Governor Kim Reynolds has made her decision on whether to name her replacement when she becomes governor.

“And we will let Iowans know when the time is appropriate,” Reynolds told reporters Monday.

On May 1, Attorney General Tom Miller issued a legal opinion, saying Reynolds would be governor when Terry Branstad resigns to become U.S. Ambassador to China, but Miller said his reading of the constitution indicated she lacked the authority to name a new lieutenant governor. Reynolds told reporters she has a transition plan “in place” for when she takes over as governor, but the details are still under wraps.

“We need to have the governor win confirmation out of the United States Senate, so that’s the first thing that needs to take place and we’re fully confident that he will,” Reynolds said. “…After that, we’ll let you know what the transition plan is.”

Neither Reynolds nor Branstad will say whether she will ask the Iowa Supreme Court to weigh in on the issue of whether the lieutenant governor has the authority to name her own replacement when she takes over as governor. And Branstad is indicating his departure date isn’t a sure thing — yet.

“I have to be confirmed before I’m going to leave office. If I’m not confirmed, I’m staying,” Branstad said, laughing.

Reynolds said: “That’s right,” then Branstad continued: “I love this state! I love this job!”

Given the strange operating rules in the U.S. Senate, it could be late this week before the 100 senators vote on Branstad’s nomination to be an ambassador.