You are here: Home / Fires/Accidents/Disasters / Tanzanian children injured in accident getting treatment in Sioux City 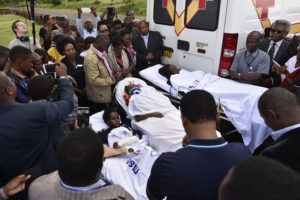 Three Tanzanian children injured in a bus crash will get treatment in Sioux City.

Three children who survived the crash of a school bus full of students that swerved off a steep road in Tanzania on May 6th are getting medical treatment in Sioux City.

Thirty-three of the 36 who died in the crash were children. The three surviving children, ages 12 to 13 sustained a combined 17 broken bones and a serious concussion. They were treated in Tanzania by local medical missionaries from Sioux City, including orthopedic surgeon Steve Meyer.

Doctor Meyer believes it was providence that put his team at the site of the crash within minutes after it occurred. He says if the team had been on time, they would never had been at the crash scene. “And they were the third vehicle there, and it’s like at every juncture these amazing God things happened. It’s like holy cats , it’s so humbling to think that God is pushing these buttons,” Meyer says.

Doctor Meyer has made 41 trips to Tanzania to perform surgery there for residents who don’t have access to medical care. He sought help from Congressman Steve King and Senator Joni Ernst to bring the children to the United states for treatment. After being turned down initially by the state department, Meyer says Congressman King connected him with the son of evangelist Billy Graham to arrange a private medical flight.

“The harder that everybody else tried — it motivated me to say if nothing else, I am not going to sleep until I know that I have done absolutely everything that I can,” Meyer says. “When Congressman King arranged for a private plane and then got us connected with Franklin Graham, it was kind of like — this is going to happen.” The mothers of the surviving children have accompanied them to America and the local Ronald McDonald House has offered to host them while their children are recovering.

He says allowing the moms to come over is a way to comfort them because Meyer says they knew a lot of the kids who died. The transportation costs for the mothers was paid for by Samaritan’s Purse. All of their services and medical needs are being donated by Mercy Medical Center and several other organizations.