You are here: Home / Fires/Accidents/Disasters / Semi driver dies in storm near Parkersburg, damage seen in many areas 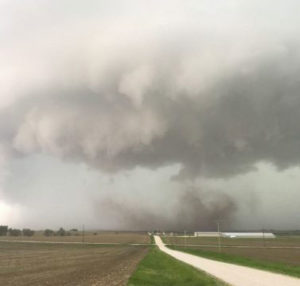 The Butler County Sheriff’s Department says 70-year-old James Budlong of Dike was driving on Highway 57 near the Parkersburg area when severe storm-level winds blew over his tractor trailer, pinning him inside.

The National Weather Service says at about the time of the accident, a 70-mile-an-hour wind gust was estimated in Parkersburg. Wind damage was reported throughout Butler County. In Greene, the storm uprooted trees that caused several homes to be damaged, while part of a building on Main Street also collapsed. A farmer in rural Butler County was also hurt when a building fell on him during Wednesday’s storms.

The Quad Cities office of the National Weather Service is sending out survey crews this morning to look over the widely-scattered damage from last night’s severe storms. Meteorologist Tom Philip says they’ll work to determine if tornadoes were the cause of the destruction — everything from toppled trees and shattered windows to flattened farm outbuildings.

“We have one team in eastern Iowa tracking a storm cell that tracked from the Fairfield area northeast toward Tipton and Lost Nation,” Philip says. The region was buffeted by wind gusts up to 70 miles-an-hour in addition to large hail and up to two inches of rain which prompted flash flooding. Some homes and farm outbuildings were damaged and tree limbs were downed, taking out power to thousands of homes.

The survey crew will be taking lots of pictures and making measurements. “They’re going to be focusing in Washington and southeastern Johnson County into southwestern Cedar County as a focal area,” he says. Funnel clouds were spotted in several areas of the state during the storms.

“We don’t have any confirmation of tornadoes just yet,” Philip says. “This will be some storm tracks that we have highlighted where we suspect and we have damage reports as well. We’ll just be investigating to see if the damage is evidence of tornadoes.”

Another possible tornado is being investigated in northwest Iowa in Sioux County. The new Beef Technology Center at Iowa Lakes Community College near Emmetsburg was damaged by high winds. One section of the new building was knocked down. Portions of the roof and beams were thrown 300 feet, denting a nearby grain bin.

(Other contributors to this story include: Bob Fisher, KRIB, Mason City, KICD, Spencer, and KMCH,  Manchester)