You are here: Home / News / Branstad heading north on his final day as governor (AUDIO) 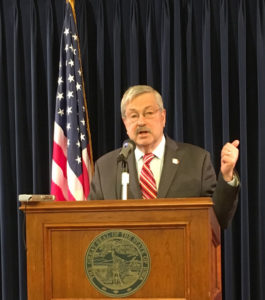 Governor Branstad talks about going home on his final day in office.

Terry Branstad is going to spend his last day as governor where — in his words — “it all began.”

“I just want to say, ‘Thank you,’ to the people that launched my career,” Branstad said this morning.

Branstad was born in the Forest City hospital, grew up on a farm near Leland and practiced law in Lake Mills.

“I’m going to see the new Freedom Rock that’s just been painted in Lake Mills which has my picture on it, in my army uniform,” Branstad said. “I’m proud that they chose to do that.”

Branstad’s first successful campaign for office was to represent Lake Mills and the surrounding area in the Iowa House.

“They were so generous and supportive of me and I want to let them know how much I appreciate the honor and the opportunity that I’ve had coming from that small county in Minnesota border,” Branstad said.

Branstad will visit the museum in Forest City where some of his political memorabilia has been deposited and where more of it is being transferred as he packs for his new post as U.S. Ambassador to China. He’ll also visit his elderly aunt as well as other family and friends in the area.

“And I have literally made friends in every county of this state and I just want people to know that I am so humbly appreciative of the support and assistance that we have received over the years,” Branstad told reporters this morning, “and I won’t forget it and I will be back.”

“I’m in a believer in free press and, you know, I grew up reading the Forest City Summit and the Lake Mills Graphic,” Branstad said.

Branstad also did weekly legislative updates on KILR Radio in Estherville when he was a state representative. Branstad told Iowa reporters he’ll be an advocate of American values like freedom of the press as ambassador to China, but the Chinese media is very different than ours and controlled by the state.

“I’m realistic,” Branstad said this morning. “I don’t know that I am going to be able to change their system, but I certainly want to be an advocate for human rights, for intellectual property rights and for many of these issues that we, as Americans, care deeply about.”

Branstad may be able to take one or two staff members with him to China, but he’s working with the State Department on the details. Lieutenant Governor Kim Reynolds is expected to bring in her own staff once she becomes governor, but she declined to share the details of those staff changes today.