You are here: Home / News / Reynolds to reveal ‘forward-looking policy’ in first speech as governor (AUDIO) 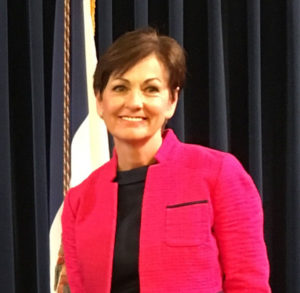 Lieutenant Governor Kim Reynolds will take the oath of office tomorrow at 10:30 in the state capitol, right after Governor Branstad resigns in the office he’s occupied for more than 22 years and is sworn in as U.S. Ambassador to China.

Reynolds will deliver her first speech as governor tomorrow and she gave a hint of what it may contain this morning.

“I’m just going to talk a little bit about me and who I am and my journey from county treasurer to serving as lieutenant governor to now serving as the governor of the great state of Iowa,” Reynolds said. “…And, of course, some forward-looking policy as well.” 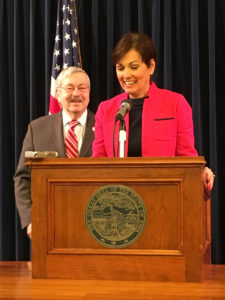 Governor Branstad and Lt. Governor Reynolds talk about the transition of power.

“I will have the opportunity to share my news about the lieutenant governor process,” Reynolds said this morning. “Iowans expect a smooth transition and so that’s what we’re focused on right now. I’ll be sworn in tomorrow and then on Thursday we’re going to be making that announcement.”

Reynolds and Branstad both spoke to statehouse reporters today. It was Branstad’s final news conference as governor.