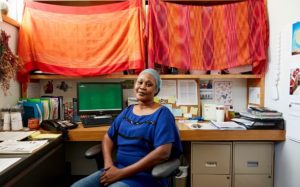 Iowa’s history of welcoming refugee families to the state is highlighted in a new online project. Nick Wuertz, with Lutheran Services in Iowa (LSI), helped create Iowa Stands With Refugees.

It features a collection of photos of people who fled violence in their home countries and ended up in Iowa. The photos were taken in the refugees’ workplaces. “The photos include a little bit of story about their own journey in coming here to Iowa and their own thoughts and perspectives about the welcoming nature of Iowa,” Wuertz said.

Wuertz, who is director of Refugee Community Services for LSI, admits the project is — in part — a response to President Trump’s executive order on immigration. “In many ways, the American people and Iowans have been misinformed about the Refugee Resettlement Program and about its longstanding integrity and security,” Wuertz said. “In addition to being a humanitarian program, there are just incredible benefits that we as Iowans and our local communities gain from welcoming people and providing people with an opportunity to build a new life here.”

Nationwide, over three-million refugees have resettled in the U.S. since 1975. “Since Governor Robert Ray really began Iowa’s Refugee Resettlement Program and really made Iowa one of the first states in the nation to begin welcoming refugees back in the 70s, I think there have been over 30,000 people who have been welcomed here to Iowa through the program,” Weurtz said.

The website currently features the pictures and stories of about a dozen refugees who call Iowa home.