You are here: Home / Fires/Accidents/Disasters / Man pulled from Cedar River near dam in Cedar Falls 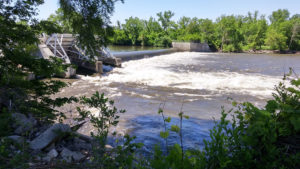 Dam on the Cedar River in Cedar Falls where 3 people have fallen in.

Rescue crews had to pull another person out of the rapidly-flowing Cedar River in Cedar Falls today. The latest rescue occurred this morning near the dam that’s adjacent to the Ice House Museum.

Cedar Falls Assistant Public Safety Director Craig Berte says a man called and said his friend went under the water and was going down river and couldn’t swim. Berte says emergency responders got to the river and the man eventually approximately 500 feet downstream.

“We were kind of lined up along the south side of the river, everybody scanning and watching, looking for somebody,” Berte says. “And all of a sudden he popped up in the heavy current real close to the railroad bridge. He popped up in an area where he was standing in water that was maybe chest deep. And he was exhausted and very pale in color.”

The man walked toward the shoreline and was rescued by rope from first responders. Bertes says the victim as a 32-year-old male, but he didn’t have his name. The man was transported to local hospital. 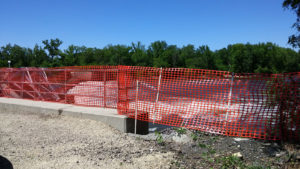 Wednesday’s rescue marks the third such incident to occur in the same area of the river since April 13th. “Anywhere around the dam is dangerous, whether you are upstream or downstream from the dam you have those churning waters. That’s where all of these have occurred, is downstream from the dam in an area that is very desirable for fishing — but it’s very dangerous if you end up in the water — because it becomes deep real quick,” Berte explains.

A man who was rescued April 13th after falling into the strong current, 41-year-old Anthony Romero, later died at the hospital. The city put up a fence today  blocking access to the popular fishing area near the dam.