You are here: Home / Agriculture / Changing weather causes issues for development of corn and soybeans 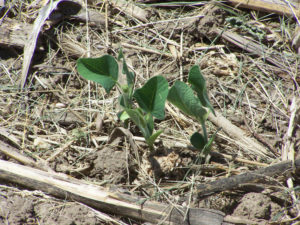 Soil issues have forced some farmers to replant their soybeans.

Some farmers are seeing issues with the development of their crops as the weather turned from wet to dry. Iowa State University Extension and Outreach Crops Specialist for Northwest Iowa, Joel DeJong, says many soybean fields have been planted twice, or even a third time, since soybeans were having difficulty emerging.

“I’m not sure the drought was the issue, I think it was a timing issue. We had some soybeans planted on the 16th of May, a few on the 15th of May that actually went into the ground and then we went into an extended cold spell followed by a fairly heavy rain…then 20th was the last time it rained so — it created somewhat of a crust,” DeJong says.

He says it has been hard for the soybeans to emerge out of that now dry, crusted ground. DeJong says that’s not the only issue created by the recent lack of rain.

“I think if you actually look at plants in general — corn plants are showing more stress,” DeJong says. “You can see on these warm, windy afternoons, a lot of plants are curling up their leaves, which is an indicator that they are slowing down their photosynthesis, so they are respiring and using less water.” DeJong says although the topsoil is dry the deeper subsoil moisture is still adequate for crop development, as plants can send roots as deep as seven feet.

“The problem we’ve got right now is that the root systems aren’t that deep yet,” DeJong explains, “so that’s why we’re struggling. Our root systems are still fairly shallow.” The Iowa State University agronomist says some people believe a dry spell helps develop stronger roots as the plant is forced to have its roots go deeper seeking moisture.

He says the corn plants are moving now from their seed roots to the normal root systems and have to make that adjustment. DeJong says any areas with soil compaction will keep those plants from proper root development.