You are here: Home / Fires/Accidents/Disasters / Alcohol and excessive speed involved in Mason City crash that killed 5 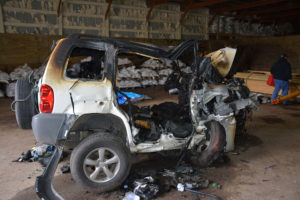 Five people died in the crash of this Jeep in Mason City.

Brinkley says the blood alcohol of the driver, 20-year-old Zachery Hartley, was above the legal limit and the Jeep he was driving was going more than twice the posted speed limit for at least six blocks before hitting a tree.

He says they believe the lowest possible speed at the time of the crash was 79-miles-per-hour. The posted speed limit was 30 miles-an-hour. 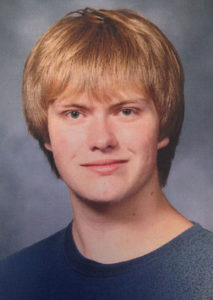 “We are not going to release Mr. Hartley’s blood alcohol level at this point. The only criminal charges that could have stemmed from this incident related to the crash were vehicular homicide charges on Hartley had he survived. At this point, because we will not be entering a criminal docket affidavit, we are not going to release that at this time,” Brinkley says. The chief says the speed of the vehicle made it impossible for Hartley to maintain control, as it veered off the road on State Highway 122. It burst into flames after hitting the tree.

Brinkley says the flames quickly traveled into the passenger compartment. “Officers who arrived on the scene were unable to open the doors of the vehicle to remove any occupants. They were also unable to slow the spread of the fire,” according to Brinkley. “The Mason City Fire Department arrived and extinguished the fire and found that none of the occupants had survived the crash.” Brinkley says the five had been gathered at an apartment prior to the crash — and though all five were under age — the autopsies showed there had been alcohol and marijuana use prior to the crash.

“On two separate occasions they obtained alcohol from a local retail establishment. The circumstances of those…that alcohol was stolen, it was not paid for. And so to that regard, holding people accountable, there isn’t a way to do that, in regard to how they got the alcohol,” Brinkley says Brinkley says he believes it’s important for the community to realize and learn from what happened, and hopefully prevent something like this from taking place in the future.

“No one called the police to report erratic driving. Nobody called to report that there was a small event that people were attending where they were consuming alcohol. We didn’t have the opportunity to intervene, and I don’t think anybody else did either,” Brinkley says. “And so, at the end of that realization I think was that as a community, this is a challenge for us. If we think this is okay and we allow it and condone it by not reporting it, then we need to do something to change the attitudes and approach to socialization and events that are fun for young people to avoid having something like this happening again.”

Brinkley read a statement from the families of the victims, saying that they appreciated all those who have supported them after the crash, and they want help prevent future tragedies like this.

He says, “Kids and adults alike, don’t get into a vehicle with a drinking driver, period. That message was pretty clear to us. Please don’t let this tragedy be in vain, think about the decisions you make, and don’t let this happen again here.” The police chief says parents need to be a nosy and know what their kids are doing and be aware. He says parents should know who their kids are with and not be scared to talk to the kids about their decisions.

Hartley as well as 17-year-old Donte Foster, 14-year-old Sydney Alcorn, 19-year-old Alex Wiebke and 18-year-old Roderick Lewis were all killed in the crash.