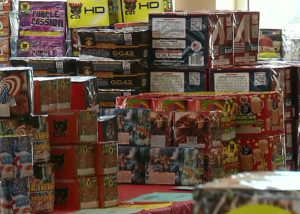 Fireworks at the Crossroads store in Waterloo. (KCRG TV photo)

The licensing process for the sale of fireworks continues as a couple of stores in eastern Iowa which received licenses are reporting good early sales.

Crossroads Fireworks opened on June 8th in the area of the Crossroads Shopping Center in Waterloo. In the first ten days of sales, it’s served more than 2,000 customers and sold some 13,000 items.
Owner Matt Reisetter told KCRG TV he’s got selections from three or four different wholesalers and believes it is the largest fireworks store in Iowa right now. He says they have been busy since opening June 8th.

“Within two minutes of unlocking the door, there were 30 people in the store,” he says. The shop was originally supposed to open June 6th, but had to push back its grand opening after an inspection revealed that they did not have a working fire alarm system.

Reisetter believes the delay actually helped their business as it gave them time to be fully stocked as a new shipment came in during the delay. He’s pleased to see so many people turning out to buy fireworks.

“”We’re excited about it. We’re a little bit surprised by the turnout,” Reisetter says. “We’re exicted that people are pumped up to come out and check out the new law.”

The Iowa Fireworks Company has a tent shop located on La Porte Road in Waterloo. Worker Jim Cameron told KCRG TV they are also reaping the benefits. “As far as overall sales, probably in the 40 to 50 thousand dollar sales within a week,” Cameron says. He says a portion of those profits goes to helping homeless veterans in Black Hawk County.