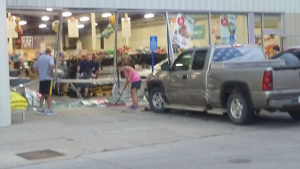 Workers clean up after a car crashed into the HyVee store in Estherville.

Two people were hurt when a car crashed through the front of an Esterville grocery store on Thursday.

Estherville police were dispatched to HyVee for a vehicle that had just driven through the front of the store. Upon arriving on scene, officers observed a 1995 Chevy Lumina driven by Robert Stump of Estherville inside of the HyVee store.

After speaking with witnesses, it was determined that the vehicle operated by Stump was attempting to leave the parking area of the store. After placing the vehicle into drive, Stump accelerated into a parked unattended vehicle and then continued through the front of the store. The vehicle then spun around inside of the store before coming to rest after striking a steel support beam.

Stump was cited for failure to maintain control of a motor vehicle. He was not hurt. Two individuals inside of the store, Jimmie Jackson of Graettinger and Diana Vonhagen of Estherville, were transported by ambulance to Avera Holy Family Hospital for treatment non-incapacitating injuries.

Damages were estimated around $7,000 to the two vehicles and around $20,000 to the store. The store was closed since the accident while repairs are being made.