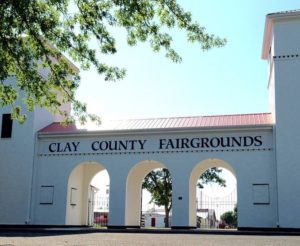 A demolition project is underway on the Clay County Fairgrounds in Spencer. Fair Manager Jeremy Parsons says an agriculture building is being torn down to make way for a long-planned outdoor plaza.

“The ag building, as we’ve discussed for almost 18 months, is being demolished as we speak,” Parsons said. “It will be replaced with Centennial Plaza, a new feature at the fairgrounds for what we hope will be the next 100 years.” This year will mark the 100th year for the event in Spencer that’s billed as “the world’s greatest county fair.”

Parsons expects the project to move quickly. “The building will probably be removed within the next few days and then construction will begin on the next phase,” Parsons said.

The 2017 Clay County Fair is scheduled for September 9-17, but there’s currently no timeline for completion of the new plaza, according to Parsons. “Basically, the area where the ag building is now becomes a park. So, there will be a lot of dirt work done and we’ll just see what the schedule looks like as we get ready for the fair,” Parsons said.