You are here: Home / Human Interest / Miss Iowa is prepared to do the heavy lifting to encourage other women 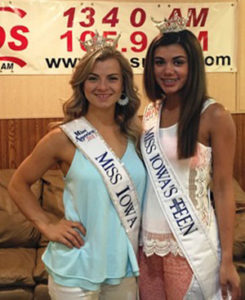 The newly-crowned Miss Iowa is a 23-year-old personal trainer from Urbandale and a Drake University graduate.

Chelsea Dubczak says her platform stems from her own experiences and is called “Ladies Who Lift.” It’s centered on encouraging women to focus on their capabilities, physically and mentally.

“I do that in hopes of developing healthy relationships with our bodies,” Dubczak says. “Especially women today, we have a lot of societal expectations about what our bodies should look like and what is defined as beautiful and I dare challenge those stereotypes.”

It’s amazing what can happen to change that mindset to focus on your capabilities, she says, instead of the number on a scale or the size of your clothes. She also wants to expand her platform to include men.

“I would love to create a second component to Ladies Who Lift that really is the same premise because men have a lot of societal expectations that are expected of them in terms of their body as well,” Dubczak says. “They’re just not as vocal about it and not as emotional about it.” During the pageant in Davenport last month, she says she kept her cool when it came down to just her and another young lady left on the stage.

“I was very calm,” she says, “and in that moment I was trying desperately to think, ‘What’s the name I don’t want to hear? They’re going to call the first runner-up, right? Are they going to call the winner? What’s going to happen?’ Then, when they called her as the first runner up and she walked away, that’s when it really hit me that, wow, I did it!” It was her 12th pageant and she believed that experience helped her stay calm. Dubczak will compete in the Miss America Pageant later this year.

Miss Iowa’s Outstanding Teen is 14-year-old Lydia Fisher from Wapello. Fisher’s platform is Educating The Voters Of Tomorrow. She says she grew up in a family where political discussions around the dinner table were normal.

“But then after I started talking with my friends and fellow classmates, I realized that wasn’t the case,” Fisher says. “I feel students should know about politics no matter how old they are because we are American citizens and we have the right to choose our nation’s leaders, so we should be properly educated in the matter.”