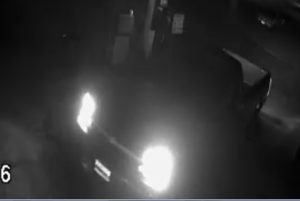 A pickup slammed through the front entrance of a convenience store in what Newton Police believe was an attempted ATM theft. It happened around 4 a.m. Monday at the West End Sinclair station in Newton.

Police say a truck backed into the front door area, causing extensive damage to the building and knocking the store’s ATM across the floor. A passenger in the truck, wearing a mask, then tried to enter the store. A store clerk was at the cash register just a few feet away and set off an alarm, which encouraged the suspects to flee – empty handed.

Newton Police are looking for a black or dark colored Chevy truck from the late 1990s to 2000s with damage to the tailgate area. The truck has running boards and chrome wheels.

Thanks to Randy Van, KCOB, Newton