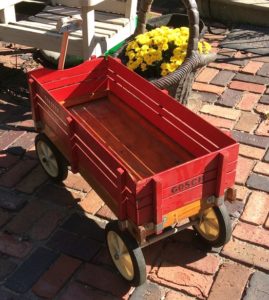 The wagon used by Johnny Gosch. It was found by his father after he received calls from customers who hadn’t received their papers on the morning on September 5, 1982.

A red wooden wagon, a piece of one of the most infamous cold cases in Iowa history, is going to be on display at this year’s Iowa State Fair.

Ron Sampson of Des Moines has possession of the wagon – which was being used by Johnny Gosch on the morning of September 5, 1982 to deliver newspapers. The wagon was left behind when the 12-year-old boy vanished.

So, why does Sampson want to showcase the wagon at the Fair? “We’re certainly not trying to commercialize anything,” Sampson says.

Gosch’s apparent kidnapping remains unsolved 35 years later — despite countless news reports, a documentary, and books about his disappearance. Sampson says he wanted to put the wagon on display for all fair-goers to see as a “tribute” to Gosch’s parents.

“John and Noreen went on a crusade to make things safer for young children, for parents, and helping law enforcement with getting things done and reported,” Sampson said. “I guess I would reach back and say they were the very beginning of the Amber Alert. They were the first people to have a child on milk cartons.”

John and Noreen Gosch divorced in 1993. Sampson, now a real estate agent, became friends with the couple shortly after their son disappeared. At the time, Sampson was owner of the Ankeny Press Citizen and he wrote a series of articles about the case. “They plowed some important ground legislatively and just everyday life. Things changed because of John and Noreen,” Sampson said. “I think if this wagon symbolizes anything it’s the great changes that they made happen for today’s parents.”

The Iowa State Patrol has agreed to include the wagon among its displays inside the Grandstand at the Iowa State Fair. Gosch’s father, John, sent the wagon to Sampson around a year ago. “He had the wagon and just said, ‘There needs to be a better place for it, a place that will touch people and mean something to people.’ He was going to start traveling at this point in his life and didn’t want anything to happen to the wagon,” Sampson said.

On the back of the red wagon, the name “Gosch” is painted in black lettering. The Iowa State Fair in Des Moines is scheduled for August 10-20.