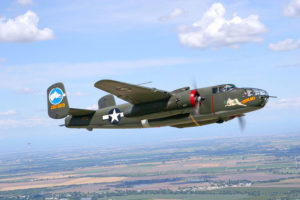 A quartet of warplanes from the World War Two era is flying over Iowa this week, making one stop in the state to offer flights and on-the-ground tours.

Michael Dober, volunteer coordinator for the Collings Foundation’s Wings of Freedom Tour, says it’s a rare opportunity to see the historic aircraft up-close and to take a ride.

“We have a B-24 Liberator. It’s the last of its type flying in the world,” Dober says. “The B-17, fully restored, a B-25, and this year we have a new P-51 Mustang D-model, it’s the double-canopy.” Dober says the three bombers and the one fighter are the “real deal” and appear like they just came off the flight line in the mid-1940s.

“The Mustang last year won the Grand Champion Award at Oshkosh for restoration and they used to call the ’17 and the ’24 basically ‘mission-ready’,” Dober says. “All they would have to do is take the inert bombs out and change the 50 (caliber guns) and they are mission-ready.” Visitors can take a flight, for a fee, or chose to just study the warbirds on the tarmac.

“Both the ’17 and the ’24, you can crawl through all day if you want,” Dober says. “We have people who just come down and talk to people and go through and yeah, you can get a little grease on you.” The tour will be setting up at the Waterloo airport around noon today and will be there through Wednesday at noon.