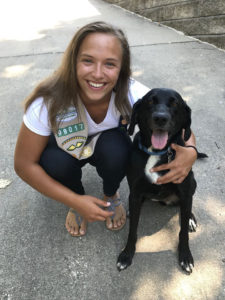 Lizzie Worthington and her dog Nona.

An Iowa high schooler has earned the highest achievement in Girl Scouts after raising more than $150,000 to build a new trapshooting range in Poweshiek County.

Lizzie Worthington of Brooklyn started the project two years ago.

“I started shooting when I was in seventh grade and I kind of fell in love with the sport of trap shooting,” Worthington told Radio Iowa. “When I decided I wanted to get the Girl Scout Gold Award, I kind of just thought and thought and it ended up being: ‘Hey! Let’s build a trap range that’s closer to my community and closer to more people.'”

Worthington estimates she spent more than 500 hours working at the site that’s along Highway 6, east of Grinnell, near the county landfill.

“We have two trapshooting fields. Each field has five positions, so five people shoot at once. Hopefully in the future we’ll have more than that,” Worthington said. “We have a clubhouse. We have restrooms. We have a huge parking lot, so hopefully that will open up lots of opportunities.”

Worthington organized volunteer work on the site as well. Adults brought in their earth-moving equipment — things like backhoes and end loaders — to ensure the range meets Amateur Trapshooting Association certifications.

It’s called the Bear Creek Range and the grand opening ceremonies are this Saturday morning. A $40 yearly membership in the Poweshiek County Sportsmen’s Association will let people use the new range, along with two others in county.

“The sport is growing crazy fast,” Worthington said. “It is adding more and more and more kids to the state shoot every single year.”

Worthington has established a “Bear Creek Range” page on Facebook to raise funds for upkeep of the facilities and, perhaps, fulfill her ultimate dream. That would require raising another $150,000 to add the kind of “international trap” range that’s featured in the Olympics.

Worthington graduated from BGM High School this spring. She’s heading to Iowa State University this fall to study chemical engineering. Worthington also plans a career in the military and will enter the Naval Reserve Officers Training Corps at ISU.