You are here: Home / Fires/Accidents/Disasters / Tornado season winding down with numbers near average 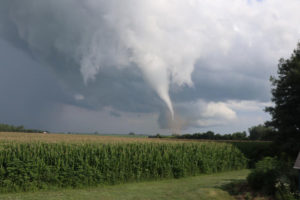 Tornado near South Amana in July.

Tornadoes can spin out of the sky during any month of the year in Iowa, but now that we’re into August, twisters are becoming much less likely.

Meteorologist Rod Donavon, at the National Weather Service, says Iowa is wrapping up the season with fewer tornadoes than usual.

“Certainly, we did start off fairly quickly in 2017, we did have a couple of tornado events, one in February and another one in March, that accounted for several tornadoes,” Donavon says. “We’re already sitting at 40 tornadoes right now. The average in Iowa is mid- to upper-40s so we’re pretty close to average, even though we’ve been fairly quiet the last month or two.”

“We’re going back to another dry period and we’ll really start tailing off,” Donavon says. “Typically, in severe weather season, we tend to go more damaging wind events as we get more into July and August and our peak tornado season really ends by mid- to late-June, so, we’re starting to get out of tornado season.” Last year, Iowa reported 43 tornadoes.