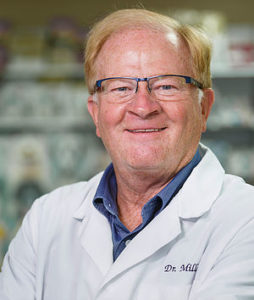 A veterinarian from Fairfield won Tuesday’s special election for an open seat in the Iowa House.

“I’m just overwhelmed with happiness now, I guess, just for all of the voters of our district, all of the folks who have been helping me the past few weeks. This is just an energizing and thrilling experience,” Democrat Phil Miller, the new representative of House District 82, told Radio Iowa after the polls closed and the votes were counted.

Miller is replacing the late Curt Hanson of Fairfield, who died in June. Hanson was also a Democrat, so the outcome of the election does not alter the party alignment in the Iowa House.

“We’ve been so busy that you don’t really think about results. You just think about what needs to be done to get the process to the finish line and to make sure you do things so that we finish strong,” Miller said. “And, by golly, we did.”

The district covers Van Buren and Davis Counties and much of Jefferson County. Miller has served on the Fairfield School Board for four years and is currently its president. Miller said boosting state support of public schools is his number one priority.

“Every year I’ve been on the school board, we’ve had to reduce our spending in our General Fund and this last year we had to reduce spending by almost $900,000,” Miller said, “…so I know when Des Moines decides how much money we can spend per pupil how that affects things back in rural areas.”

There have been four special elections for legislative seats in the past eight months, but this was the first one in a “swing” district where neither party had a voter registration advantage. President Trump won the district by more than 20 points last November. Miller — the Democratic candidate in the special election — finished ahead of his Republican opponent by about nine points.

Representative-elect Miller is 65 years old. He’s a graduate of Iowa State University’s veterinary school. He grew up on a farm in Keokuk County, near the community of Webster. Miller worked part-time at a veterinary clinic in Fairfield while he was in college. Miller was offered a job at the clinic when he got his degree and he’s lived and worked in Fairfield ever since.