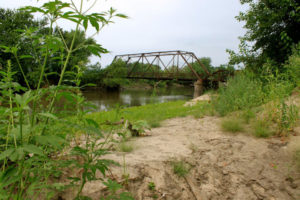 Supporters of an effort to save a 125 year old bridge in central Iowa have learned a plan to move the structure by helicopter isn’t a viable option.

The 212-foot Red Bridge, listed on the National Register of Historic Places, spans the South Skunk River northeast of Monroe. It’s long been closed, but now it’s in danger of falling into the river.

Joe Otto has been leading a project to save the bridge and have it moved to Quarry Springs Park in Colfax.  Otto told the Jasper County Supervisors this week that a plan to have an Iowa National Guard Chinook helicopter lift the bridge has been ruled out.

“The pony truss was just like a ton too heavy for a Chinook to move it,” Otto said. “Mathematically, they could’ve flown in there and picked it up with cables, but the helicopter would’ve been running on fumes at that time and it was just too dangerous to do.”

Now, Otto wants the West Des Moines engineering firm of Calhoun and Burns to visit the bridge, so they can provide an accurate cost estimate for moving it off the river by crane.

“So there is a plan in place that I can present to people and say ‘the county has done their due diligence on this, they have a plan in place, now it’s up to me to find a way to pay for it.’ I can’t do that until I get this information,” Otto said. The company’s rough estimate for moving just the Main section of bridge is $50,000 to $60,000.

Earlier this year, Otto presented the Board of Supervisors with nearly 600 letters from people supporting his “Save the Red Bridge” efforts. The Red Bridge was one of the few Warren truss bridges built in Iowa in the 19th century. Local bridge contractor H.S. Efnor built the main span for just over $3,500 in 1892. In 1947, the bridge was heavily damaged by flooding. The county replaced one of its steel cylinder piers with a concrete pier and added the pony truss approach span on the north side.