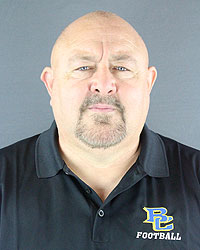 The Briar Cliff football team will have a new coach and a new home for the upcoming season. After spending the last four years on the staff at Liberty University, Dennis Wagner takes over a program that was 1-10 a year ago. Briar Cliff will also play its home games at renovated Memorial Stadium in Sioux City. For the past four years the Chargers played their home games in the DakotaDome in Vermillion, South Dakota.

“Getting us back here makes us part of the community again”, said Wagner. “Practicing on campus is another big part of it. I would like to thank the administration for getting those things done. It helps our recruiting, our fan base and the students on campus.”

The Chargers will feature a young team that includes 40 newcomers.

“We had about 68 guys at our press conference the day we got the job and 38 of them made it through spring ball doing things right and accepting the culture”, added Wagner. “There is actually two more new guys than there are returning players.”

Wagner has also made stops at Nebraska and UNLV. The Chargers open the season at Waldorf on August 26.