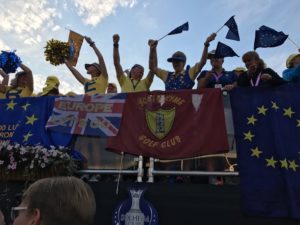 The opening day of the Solheim Cup is underway at the Des Moines Golf and Country Club and the crowd and play has been as spirited as promised. Europe won two of the morning matches and has two and a half points while the US has a point and a half heading into this afternoon’s four-ball matches.

The opening match produced a thrilling finish. Christie Kerr sank a birdie putt at the 18th hole as Kerr and teammate Lexi Thompson halved their match against Charley Hull and Melissa Reid.

“Clutch”, joked Kerr. “Honestly I took a lot of deep breaths before I even went back to mark my ball and I didn’t have any nerves so that is scary.”

Thompson was the first American to tee off in front of the huge crowd. She drove the green and moments later Kerr sank and eagle putt.

“Just the amount of people on that first tee and hearing all the chants there is nothing like it”, said Thompson. “It’s an unbelievable feeling.”