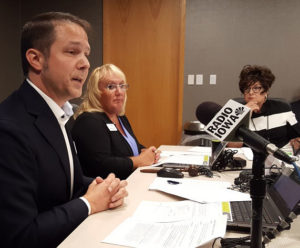 IEDA board member Chris Murray talks about the Apple project.

Chris Murray discussed details of the project with fellow members of the Iowa Economic Development Authority (IEDA) board.

“The proposed cost of the project is one-billion-375-million dollars and Apple is proposing to create 50 new jobs,” Murray said. IEDA director Debi Durham believes the 50 jobs created by Apple are just a small piece of the project’s benefit to the state.

“It’s always unfortunate that we always focus on ‘well, it’s just 50 jobs,’ because we’re really not impacting what this really means and how this is really changing the knowledge economy in Iowa,” Durham said. The Apple project will create hundreds of construction jobs, as well, over the next several years, according to Murray.

The IEDA board awarded Apple $19,650 in tax breaks for the project, which will cover 2,000 acres in Waukee. The Waukee City Council this morning approved a property tax abatement for Apple — an incentive worth over $188 million over a 20 year period. Apple will become the latest technology giant with a presence in Iowa. Google, Facebook, and Microsoft already have data centers operating in the state.