You are here: Home / Sports / Cyclones use defense to rally and down UNI 42-24 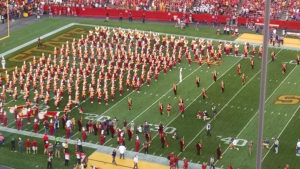 Northern Iowa struck first and kept Iowa State in check early before the Cyclones rallied and went on to a 42-24 season opening win over the Panthers Saturday in Ames.

UNI scored a touchdown on its opening drive and had control of the game until ISU returned two interceptions for touchdowns. 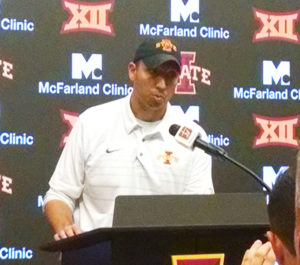 “I thought a good team win. Was it perfect, no. I think the thing that I probably was most impressed with is we didn’t panic throughout the football game,” Cyclone coach Matt Campbell said after the game.

He said they have emphasized the importance of playing through rough stretches.”We talked so much about control the controllables and I thought our kids really did a great job of that throughout the football game. Offensively we kind of got off to a slow start…I think we were 0-4 in the first half on third downs. They did some things, we didn’t panic, we made some adjustments and really were able to come back in the second half and be excellent…on third downs. So, I thought those were positives on our end,” according to Campbell.

He said their ability to handle adversity was the difference in winning this game after losing to UNI last year. He said last year when they got a lead they panicked and had some turnovers and didn’t makes some stops they needed to make. “And I think that’s the biggest difference that I’ve seen, when we got some adverse situations we were able to step up and make those plays,” according to Campbell. 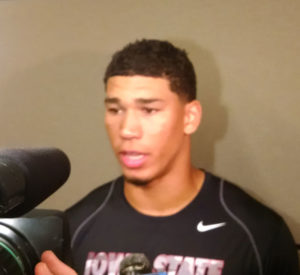 Cyclone senior wide receiver Alan Lazard says the offense had trouble getting things going early. He said it was very disappointing to start out and not be able to convert a third down in the first half, but he says they have been preaching all through fall camp that that they need to stick with it and get things to go in their favor.

Lazard credits the interception returns for touchdowns by Willie Harvey and Kamari Cotton-Moya for turning things around. “You take away those two pick sixes, it’s a whole other ballgame,” Lazard said. “UNI played a heck of a game and having those two pick sixes and also the third pick from (Brian) Peavy was just a huge momentum swing. You could just see the energy on their side die out and the crowd got into it a lot more.”

Lazard caught eight passes for 108 yards and that made him the all-time leader in receptions for ISU.  Lazard said it’s a huge honor and shows how much hard work he has put in and how much the program means to him. “It’s all great an everything, I’m not worried about that. I’m just happy that we won and I’m just focused on Iowa now.”

The Cyclones host Iowa this Saturday. Lazard said it’s always an important game and more so after losing to Iowa last year.

“It’s our instate rival, we are going to go out there and prepare — especially after last year. Just the embarrassment that we left on the field at Kinnick Stadium,” he said. “We’ve just got to go out there and play with a chip on our shoulder and make sure we bring that trophy back to Ames.”

Iowa comes into the game 1-0 after beating Wyoming in their opener.