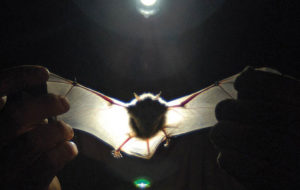 A bat study underway through mid-October in Iowa will examine how Northern Long Eared Bats migrate within the state.

Piper Roby is a research director with Copperhead Environmental Consulting, the Kentucky firm that’s conducting the study for the Iowa Department of Natural Resources. Roby says they’re looking at how bats migrate and how to protect their habitat while dealing with the deadly White Nose syndrome.

“Their numbers are declining throughout the eastern U.S. and Canada,” Roby says. “The particular species we’re investigating is also affected so we want to see how they interact in the summer and how they get to where they’re going in the fall and what hibernaculum they’re using so we can protect their summer and winter habitat while they’re dealing with this disease.”

The study is conducted by placing trackers the size of a pinky fingernail on bats during the day. At night, the research team tracks bats with an airplane that flies about 1500-2000 feet above the ground.

“We have an airplane that can track them with radio telemetry and they can stay above the bats as they move across the landscape and collect data location points as they’re moving,” Roby says. “Right now we’re basically collecting data points as they’re foraging, just kind of moving around on the landscape.,but the idea is that we will be up-tracking them as they start to migrate and we can collect those location points as the move toward their hibernaculum, so then we’ll have a migration pathway of how these bats are moving.”

Roby says this study will hopefully provide some answers on how to protect bats and slow the drastic decline of the nation’s bat population, which is impacting many areas including crop production.

“We’re sort of watching an extinction event to some point,” Roby says. “We haven’t lost an entire species yet, but the numbers are down by 80 to 90 percent in some areas, so the importance of bats cannot be understated in terms of what they can do for humans and also just part of the food chain and ecosystem as a whole.”

The bat study will cover about eight Iowa counties, including the cities of Iowa City, Waterloo, Hampton, Mason City and Clarion. The study will also look into how bats interact with Iowa’s wind farms.