You are here: Home / Health / Medicine / Mount Pleasant boy is the Kid Captain for Iowa in big game 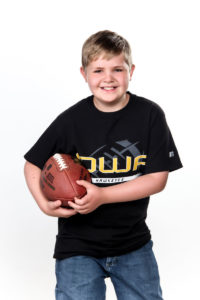 A 12-year-old boy from southeast Iowa will serve as “Kid Captain” for the Iowa football team when the Hawkeyes take on Iowa State in Ames this Saturday.

Flynn Lanferman of Mount Pleasant was just three years old when he was diagnosed with acute lymphoblastic leukemia, a fast-growing cancer that affects the bone marrow and white blood cells. His mother, Deana, remembers being stunned.

“After all the gamut of emotions, the end emotion is ‘this is it, we’re going to stand up and we’re going to win, one way or another,'” Deana said. The diagnosis would be the first of four times Flynn would have to fight cancer. He’s had three bone marrow transplants.

Flynn’s father, Jeremy, donated his bone marrow for the last transplant in September 2016. Flynn is now in remission and his mother says he’s maintained a positive attitude throughout his difficult journey.

“From talking with his doctors, they’re saying this time there’s a lot more positives than negatives,” Deana said. “There’s still always that chance (cancer will return) and (it’s) something we’ll always worry about, but at this point, we’re good, he’s good.”

Deana made her comments is a video produced by UI Stead Family Children’s Hospital, which started the Kid Captain program with the Hawkeye football team nine years ago.