You are here: Home / Sports / Hawkeyes down Cyclones in wild overtime game 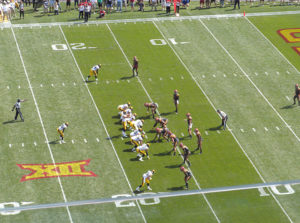 The Hawkeyes on offense in their 44-41 overtime win against ISU.

Iowa got the ball last and scored to win an overtime shootout against Iowa State 44-41 Saturday in the annual rivalry game in Ames.

Iowa had to overcome a 10-point fourth quarter deficit to even have a chance to score the game-winning touchdown in overtime. Hawkeye coach Kirk Ferentz says it was exactly what he expected.

“You know every year there’s a lot of hype, a lot of talk about this game. I think it is so good for our entire state, no doubt about that, “Ferentz says. “Today this game certainly lived up to all that hype — it was a heck of a football game. Both teams competed extremely hard, it was hard fought back and forth obviously and both teams left everything they had out there.” 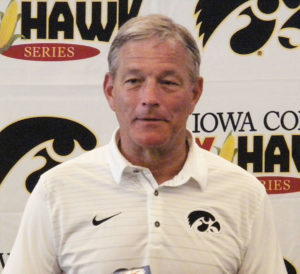 Iowa saw an 11-point lead in the third quarter slip away before mounting the comeback.

“While there’s a lot of things we need to improve on, it’s pretty evident just like last week. The thing our guys are doing is they are playing hard, they are playing together and they fight to the end. If we can continue to do that we’ve got a chance to shape into a pretty good football team,” Ferentz says. He says he is proud of the way they fought to the end because that’s what it took to win. Sophomore quarterback Nate Stanley passed for 333 yards and five touchdown, with four of the five drives being 89 yards or more.

“For him to do this on the road….this is such a tough environment for us to come into. So, for him to play the way he played in this environment I think that just says a lot,” Ferentz says. He says it reminded him of the plays C.J Beathard made in Ames two years ago. 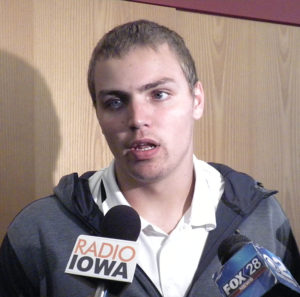 Stanley says he was not as nervous in his second start. “I felt a little more confident and that goes back to preparing all week and having the trust in my teammates. All week they did stress that they have my back…and that they trusted me and have all the confidence in the world in me and trusted me and that means a lot,” Stanley says.

Stanley did not throw an interception, but did overthrow a couple of wide open receivers and says that’s something they have to continue working. He did convert each time the team got in the red zone, including the winning touchdown pass in overtime.

He says they had the mindset that they were not going to be stopped when they got there, and says both teams had that mindset. One of the key scoring passes was to Akrum Wadley out of the backfield that went for 46 yards to tie the score with 1:06 in regulation. Wadley wasn’t thinking of scoring when he caught the ball.

“In those two-minute situations we always talk about if you catch the ball inside the numbers be a player and run. I actually had a chance to get out of bounds and people were telling me to get out of bounds, but I scored,” Wadley says. Wadley’s stop and go moves froze the defenders and then he broke free and took it in to score. He says the moves are instinct.

“I’m a small guy you know I’m not just going to power my way through…so I got to freeze them up and try to get what I can,” Wadley says. He finished with 127 yards rushing and one touchdown with a career high 28 carries. He had four catches for 72 yards and the touchdown.

Ferentz says Wadley’s late game score and the overtime continue the tradition of the rivalry. “This is the way this series is, “Ferentz says, “we been on the short end of this one down in that same end zone, same spot coincidently, not that long ago. When you get a chance to enjoy it, you enjoy it.”

Cyclone coach Matt Campbell credited Iowa for closing out the game. “You know they made those different plays at the end of the football game to win that game. I think that’s really what it came down to — some critical situation moments they were able those plays to win that game and we didn’t,” Campbell says. While they didn’t win, Campbell says this team play hard all the way through and he sees improvement.

He says it is night and day from last year’s game as his team kept coming back, but just couldn’t make the final dagger play they needed to win. Cyclone senior wide receiver opened the scoring with a leaping touchdown catch and had one other score. He says they have to keep working to complete the details to finish games.

He says they were up 10 and let it slip away because they couldn’t get a couple of first downs. “It’s a whole team thing, it’s not an offense, defense or special teams — it’s everyone one through 120 or whatever it is. Just being able to lock in focused on.” Lazard was asked if the loss is tougher coming in this rivalry game.

“All loses suck. This one obviously a little bit more because we had them. We’ve just got to bounce back from it,” Lazard says. It is the first loss of the season, dropping ISU to 1-1. Coach Campbell says the next game will tell him where the team is.

“I think you are going to find a whole lot about who we are next week and how we are able respond to this to be honest with you,” Campbell says. “You know, I thought our kids played as hard as they could for as long as they could. But I think you are going to find out a lot about who Iowa State and Cyclones are in how we respond to this situation in my opinion.”

Iowa has now won three straight in the series for the first time since winning three in a row from 2008-2010. The Hawkeyes have won in their last three trips to Ames.